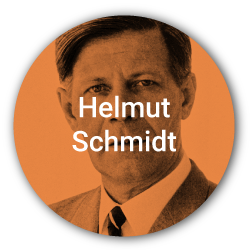 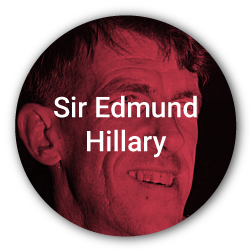 Schmidt was a German political leader and head of the Social Democratic party and Chancellor of West Germany (1974-1982). Schmidt’s aims were to improve relations with East Germany and the USSR and to maintain the prosperous West German economy. In 1982, he lost a confidence vote in the Lower House of the German parliament to Helmut Kohl of the Christian Democratic party.

Hillary was a New Zealand born mountaineer, explorer, and philanthropist. He served in the Royal New Zealand Air Force as a navigator during World War II and was wounded in an accident. On 29 May 1953, Hillary and Sherpa mountaineer, Tenzing Norgay, became the first climbers officially to have reached the summit of Mount Everest. Hillary established the Himalayan Trust which was devoted to assisting the Sherpa people of Nepal. From 1985 to 1988 he served as New Zealand's High Commissioner to India and Bangladesh and concurrently as Ambassador to Nepal.

Known as a social and literary critic as well as a mystery writer, poet and illustrator. He has been referred to as the "prince of paradox". His best known novels are the Father Brown series.